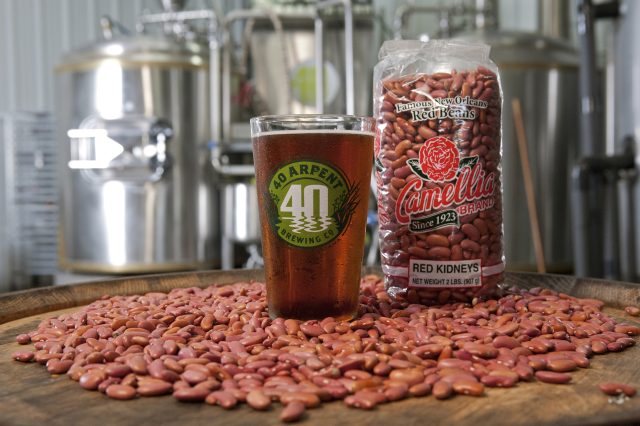 And it doesn’t get more New Orleans than Camellia Brand red beans. Using 25-lb. sacks of beans, brewmaster Michael Naquin cooks them for more than four hours in pursuit of that unmistakable creamy texture. Then he adds the beans — along with equally huge portions of flaked, oat-style brewer’s rice — to the grain mash and hits the “Delicious” button.

“It’s got a hoppy-earthiness to it at first,” Naquin has said of the beer. “But then it ends with a dry biscuity flavor. That’s the idea behind the beer — I want to surprise people. They see the color and think it’s a heavy beer, but then it’s actually light, palatable, and sessionable.” In other words, Red Bean Ale is a easygoing beer with wide appeal, even for non-connoisseurs.

Thirsty yet? Now’s your chance to sample 40 Arpent’s Red Bean Ale at the World of Beer in Metairie, at 4100 Veterans Memorial Blvd. And come hungry, too, because on Monday, June 1, the beer emporium is sponsoring what it calls “a perfect beer and food pairing.” To celebrate the newly released version of this unique ale, World of Beer is serving up heaping helpings of classic Camellia red beans and rice along with 40 Arpent’s red bean brew!

But that’s not all. Since Red Bean Ale contains only legumes and rice, but no meat or other vegetables, 40 Arpent is intent on giving tasters an unforgettably spicy experience at this launch party. Brewery staff will be loading up World of Beer’s special infuser with wood chips soaked in hot sauce and liquid smoke, along with Summit hops rich with onion and garlic flavors, to distill that definitive New Orleans culinary experience into every glass. Beer lovers won’t find this magically infused concoction anywhere else!

And you too can become an honorary 40 Arpent brewmaster! The brewery will be giving away a free official company work shirt complete with the distinctive green 40 Arpent logo.

Do not miss this only-in-Louisiana launch party! Although bottling plans are in the works, for now this seasonal Red Bean Ale comes but once a year!