Alabama Camp Stew: Deep South Back Of The Stove Cooking 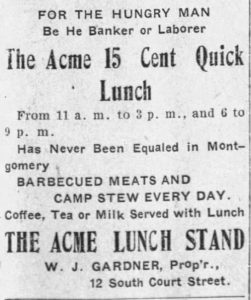 Across the Yellowhammer State, cooks of every description have been lighting fires under old kettles and cooking camp stew for well over a hundred years. From the Tennessee Valley in the northern part of the state to the Mobile-Tensaw Delta on the Gulf Coast, camp stew is available nightly in hundreds of households, barbecue shacks, meat and three joints, and of course, hunting camps. The fortunate among us may find the dish in the backwood taverns that dot the rural countryscape across the region. Camp stew is so ingrained in the psychology of Alabama eaters that it made the 100 Dishes To Eat In Alabama Before You Die list published by the Birmingham News, a journal with roots that stretch back to the 19th century.

1912 barbecue stand as for camp stew

What It Is & Where to Find It
Snack bars at fiddler conventions, pro-wrestling matches, National Guard Armories, high school football games, beauty pageants, and Baptist homecomings held across the entirety of the state reliably have big pots of camp stew burbling on the range. If you’re not from Alabama you may ask yourself, what is this dish? It’s the stuff of fever dreams: a potent witch’s brew of all manners of meats, vegetables, and starches including but not limited to common ingredients such as pork, beef, and chicken serving as proteins with tomatoes, onion, and corn filling the role of vegetables. Worcestershire sauce is a crucial component. Wild game like alligator, squirrel, quail, and feral hog may also be found in an adventurous cook’s stew. 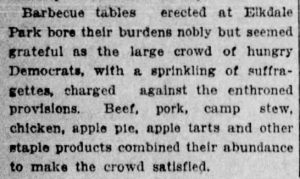 Beans: A Must-Have Ingredient
Butter beans, Limas, or Baby Limas are often included, and you may even find Great Northern beans or Pintos depending on what part of the state you’re exploring. “If it ain’t got beans in it, it ain’t camp stew,” is a common refrain heard when discussing the dish. Piscine versions of camp stew may be found as you explore diners and cafés alongside rivers like the Choctawhatchee, Black Warrior, and Escatawpa. 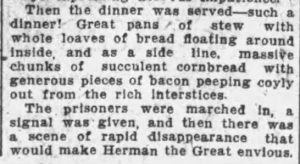 Feeding the Masses in Good Times and Bad
In the early 20th century the penal colonies of the day were not immune to the charms of camp stew. The Montgomery city jail cooked a few large vats of the stuff to feed their prisoners at Thanksgiving time. Montgomery would prove itself to be a critical nexus in the furtherance of the popularity of camp stew as the 20th century gathered steam. Saloon keepers in the heart of the city began using the dish as a powerful magnet to get the drinking men to frequent their establishments. With purchase of a cocktail or cold draft beer, these enterprising business owners would set out a bowl of the stuff with nary a charge. When the San Francisco Earthquake of 1906 struck, the good citizens of Alabama swung into motion and launched a camp stew-based charitable festival and sold a thousand tickets to a massive stew party held at the legendary Pickett Springs Resort near Montgomery. All the moneys were remitted to the citizens of San Francisco to assuage their suffering.

A Badge of Honor
No less a luminary than legendary woodsman, author and naturalist Horace Kephart would soon integrate the cooking of camp stew into the regimen of becoming an official Boy Scout. In that halcyon era, a young scout had to demonstrate proficiency in the preparation of camp stew to earn his cooking merit badge. Want to become an Eagle Scout? Fire up that pot of camp stew, and it better taste good. By the time the 1930s came along, a regional derivation of camp stew called Lumberjack-style was being practiced in Jefferson County in the central portion of the state, but the details of what was surely pure deliciousness have been lost to the sands of time. 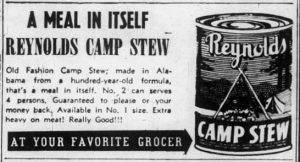 A Canned Version, Extra Heavy on the Meat
At mid-century, a canned version of camp stew was being offered in Birmingham grocery stores but the enterprise was not fully formed enough to attach a name brand to the product. That would change as the Reynolds-Holston Canning Company of Troy, Alabama, soon waded into the fray with their own canned version of the food stuff. No strangers to marketing, the ads of the day trumpeted their product as being “extra heavy on meat”, and “100-year-old formula” was often prominently mentioned as well. 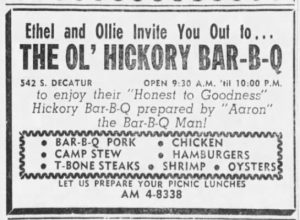 Fundraising for Civil Rights & Putting Restaurants on the Map
As the Civil Rights-era dawned, camp stew played a prominent role in fundraising activities. Black women fanned out across Montgomery County, Alabama, selling fried catfish sandwiches, chicken and dumpling plates, and yes, camp stew. The money was plowed straight back into the movement, and these humble foods helped foment real change across the region. One now-successful restaurateur threw what she called “Heaven and Hell suppers” as she was trying to raise money to get her business going. A fiery camp stew would be served followed by ice cream and pound cake. Martha’s Place is now in its fourth decade and feeds upwards of 500 people daily. Camp Stew helped Martha Hawkins make her dream a reality. Camp stew is writ into the genetic code of Alabamians. The elixir has a thousand mothers and a thousand fathers, each claiming primacy. Truth be told, there is no “one true camp stew”. It’s the one that is currently in front of you that will most likely serve as the best one you ever ate. That is until you visit Aunt Hazel and Uncle Ralph’s cabin near Wetumpka this weekend, when a new ranking will be loudly and enthusiastically affirmed. 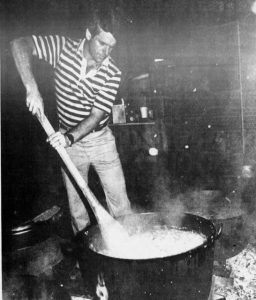 This post hails from R.L. Reeves, Jr., a Texas photographer and writer who is living and documenting life in the 9th Ward of New Orleans. His recipes and cooking notes can be found on his food and culture blog, scrumptiouschef.com 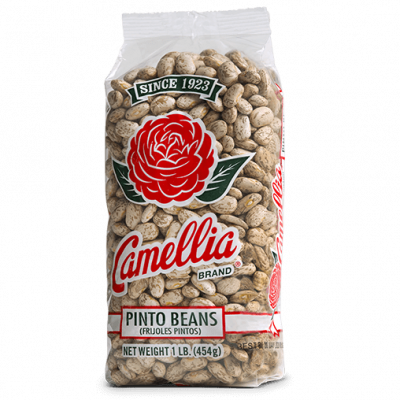