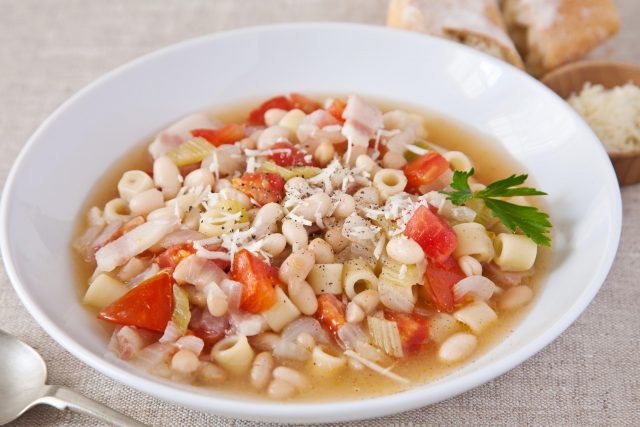 Human Beans
The cultivation and consumption of legumes can be traced as far back as the Iron and Bronze ages, and man’s dependence on them as a nutritious, easily stored food has been well documented throughout history. In fact, beans and peas have been woven lavishly into cultural traditions throughout the world.

Spirit Beans
Ancient Egyptians buried their loved ones with beans to be used in the afterlife. Beans discovered in King Tut’s tomb by Howard Carter in 1922 were allegedly sprouted and cultivated to maturity by Carter. Beans have also been discovered in Aztec tombs.
Ancient Romans associated beans with the spirit world, and performed annual rituals to banish troublesome ancestral spirits from their homes. The head of the household recited a cleansing prayer while walking backwards and tossing black beans over his shoulder.

Pease Porridge in the Pot, 9 Days Old
Upon seeking shelter at an inn, Medieval Europeans knew they would find a pot of “Perpetual Stew” simmering eternally upon the hearth. An early sort of broad bean- or pea-based gumbo, the stew was fed continuously with whatever was edible, with contributions made by innkeeper and guest alike. From this jumbled assemblage came the great French bean dish, Cassoulet. People of the northern French Isle of Guernsey ate their white bean stews in earthenware crocks or “bean jars.” Housewives would fill the crocks with beans, scraps of meat, fat, cooking liquid and seasonings each evening and deliver them to the local baker to be placed in the oven overnight. Residual heat from the oven’s daily use slowly cooked the contents of the jar, which was enjoyed the next morning as a hearty and nutritious breakfast.

Blessed Beans
When Dean Martin crooned “When the stars make you drool just like pasta fazool… datz amore,” he was applying romantic imagery to Pasta e Fagioli (also called Pasta Fagiole), a traditional Italian peasant dish of pasta and cannellini beans simmered in broth with garlic, onion, tomato and spices. The Italians also incorporate fava beans into their springtime Feast of St. Joseph celebration, when they are served blended into frittatas or simmered in garlic sauce. When dried, roasted and blessed, favas are handed out as “lucky beans,” thought to ward off poverty and hunger. On New Year’s Day in the American South, blackeye pea dishes are served to bring good luck in the coming year – a tradition thought to derive from a similar Jewish custom as well as from necessity in the hard times after the Civil War.

Sweet Beans
While most traditional bean dishes are savory, Asians customarily cook red kidney and other beans down to a paste with sugar or honey for use as a base in sweet desserts. The paste is routinely blended into pastries, breads, ice cream, candies and drinks. Fried dough balls filled with sweet bean paste and covered with sesame seeds are historically popular, as are sweet bean paste pancakes.