Lundi Gras 2022: The Red Beans and The Dead Beans Parades

These Beans were Made for Wearing

Just as red beans and rice is a Monday tradition going back generations, the Krewe of Red Beans Parade has become a popular Lundi Gras tradition. But this krewe isn’t serving red beans – they’re sporting elaborate costumes adorned with designs made from the star of New Orleans’ favorite weekly dish. Each year, the day before Mardi Gras, the humble bean is elevated to a work of art. The Krewe of Red Beans was founded in 2008 by Devin DeWulf when a bean-covered suit he created for Halloween received overwhelming praise. More than a decade later, the krewe’s 150-plus members elicit raves of their own with bean-dazzled suits featuring intricate patterns, clever puns, and sincere homages, all laid out with thousands of tiny beans. 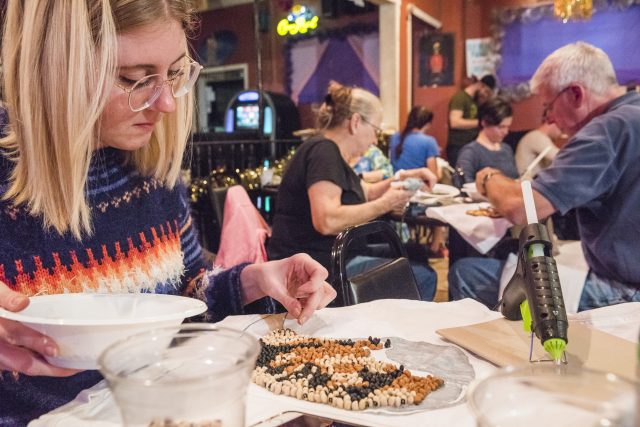 A Labor of (Legume) Love

Inspired by the traditions of the Mardi Gras Indians, whose elaborately-beaded and feathered costumes are hand-sewn from scratch each year, krewe members spend months planning, designing, and constructing their suits. The effort is obvious in the complex designs rendered through their bean-work. While red beans are the star, the suits also incorporate other varieties of bean. Camellia, a strong supporter of local traditions and initiatives, donates hundreds of pounds of beans to the Krewe each year.

The suit-making process begins in earnest each November. Like New Orleans’ Social Aid and Pleasure Clubs, the Red Beans Krewe features a social element (as well as a charitable angle through its Bean Madness Tournament held every March). Krewe members meet each Monday at a neighborhood bar to work on their costumes, swap design tips, and share glue-gun techniques, not to mention eat some red beans and rice. While members also work on their costumes individually, these weekly gatherings inspire creativity and the camaraderie of a true club. Krewe members comprise a full range of artistic abilities, from dabblers to master artists, but all share a love of beans and a desire to express their creativity through art. More than just assembly-line, copycat costumes, each krewe member has a chance to bring their own ideas to light. 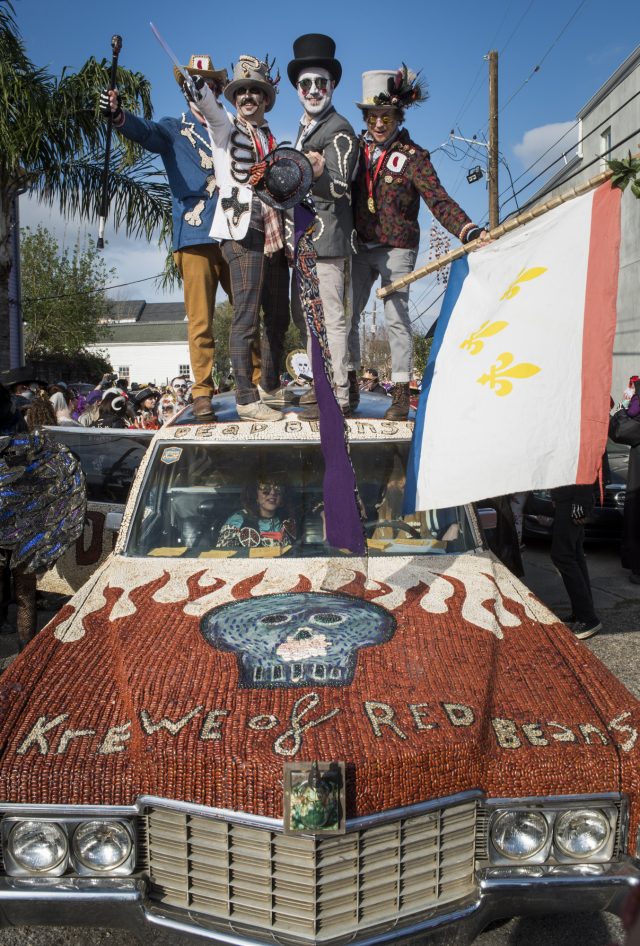 Though it has grown since its inception, the Red Beans Parade has remained a close-knit, neighborhood-oriented parade. When the membership ranks swelled after ten years, founder Devin DeWulf decided to split the krewe into two different parades, each with 150 members. A group within the Red Beans krewe had already adopted a tradition of portraying skulls and skeletons with their bean art, so in 2018 they officially broke off and were anointed the Dead Beans Parade. What sets the two krewes apart? Red Beans krewe members create costumes depicting jazz musicians, elaborate designs, homages to New Orleans Saints players, puns like “Bean in the Oven” or “Bean There Done That”, renderings of Camellia brand imagery, and much more. The Dead Beans display imagery relating to death and mortality, and often honor the recently deceased. Both parades are joined by local brass marching bands and led by their respective royalty.

Not long before Lundi Gras, the krewes announce their royalty, each determined in their own unique way. Red Beans krewe members elect a king or queen, based in part on seniority. Long time krewe members also choose a princess, who they feel is the most “ridiculous” krewe member. Dead Beans members nominate fellow members for the roles of Empress/Emperor, Oracle (who conducts a ceremony to honor the dead before the parade), and Magician (the “jokester”). For the first time this year, royalty will be decided at a joint, members-only Election Ball. 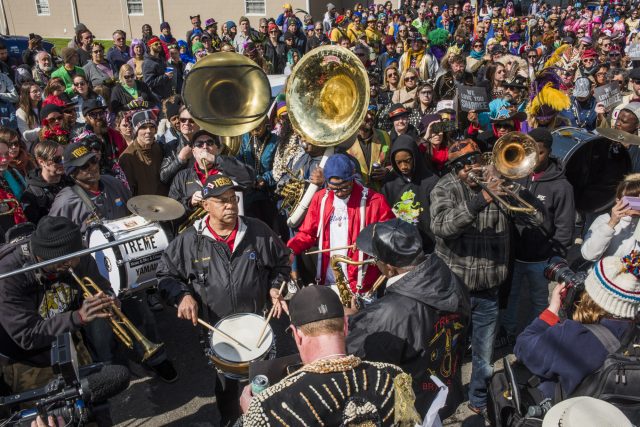 Both Bean Parades Are Ready for Lundi Gras Kickoff

On Lundi Gras, the Monday before Mardi Gras, the painstaking work of the two krewes will be on display for all to see. The 2022 Red Beans Parade will wind along its traditional route through the Marigny, while the 2022 Dead Beans will meander along Bayou St. John and through Mid-City. The two krewes will eventually meet up in Treme. Be sure to look out for one of the main bean attractions of the Dead Beans Parade – its amazing, bean-studded hearse. All throws are locally-made, including resin red beans, glitter packs, and mini hearses. Get a spot along the route to see the suits up close, as each design deserves a full inspection. Want to try your hand at bean art too? Unlike most krewes, Red Beans and Dead Beans encourage anyone to make a bean suit and join in the fun on the day of the parade.