Of Beans And Babies 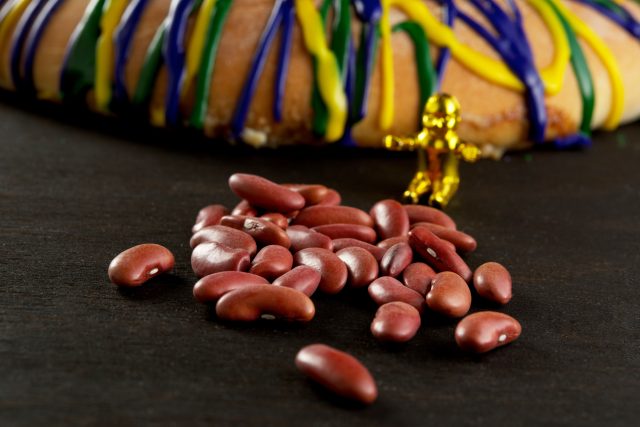 The Secret History of Beans in King Cakes

Though a favorite part of current Mardi Gras celebrations, the custom of the “lucky” recipient of the hidden baby being responsible for providing the next king cake is a modern one. In pagan times, the return of the sun during the winter solstice was celebrated with festivities during which any man could become the “sacred king” of a tribe for the year if he found the bean in his slice of cake during the celebration. The bean was representative of new beginnings because the bean plant is usually the first to emerge from the earth after winter. After a year of the good life, the “king” would be sacrificed, and his blood returned to the soil to ensure that the harvest would be successful.

As was often the case following the Crusades, old pagan rituals were imprinted with new Christian meanings, and the celebration of the soon-to-arrive spring morphed into a celebration of the feast of Epiphany on January 6, when the three kings (la fete des rois) visited the Christ child. Though the meaning had changed the tradition remained: Flaky cake layered with almond paste was imbedded with a bean and topped with a gold paper crown. The recipient of the bean within his slice of cake became king -though now just for the day, and he wore the crown. He also got to live.

A New Orleans Twist on Tradition.

One of New Orleans’ oldest Carnival organizations, the Twelfth Night Revelers further evolved the tradition in 1870 when, instead of a simple red bean, they began inserting a gold painted bean into the cake they served to the young women of their “court” on the Feast of the Epiphany. The girl who got the gold bean reigned a queen for the season. This tradition continues today, though a wooden replica of a large cake is now employed. The maidens pull open little drawers in the cake’s lower layer which contain a number of sterling silver charms shaped like beans, and a single made of real gold. Choosing a silver bean makes you a member of the court; the maiden who finds the gold bean becomes the queen. 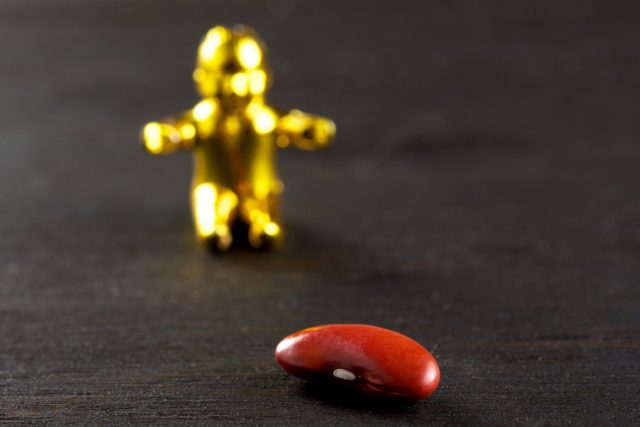 When the king cake ritual became fashionable in society circles, others adopted the tradition with their own king cake parties, often revolving around school and neighborhood groups. Many native New Orleanians grew up on king cake from McKenzie’s, the large local bakery chain that dominated all others until it closed in 2000. And though there are many stories about how the practice of using the familiar plastic babies came to be, Donald Entringer Sr. – the owner of McKenzie’s Pastry Shoppes – explains it thusly “We were the first to use the babies,” he said. “A salesman came in one day and said, ‘Look at this cute little thing. It won’t get lost like a bean.’ I’ve heard people say it’s supposed to represent the Christ Child, but that’s not true. It was cute. It was just a trinket that happened to be a baby.” Though ever evolving, the trinket in the king cake tradition is a beloved part of Carnival season and promises to be for many generations to come.