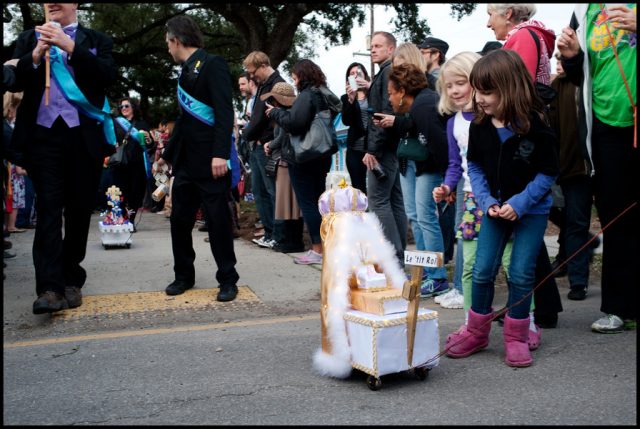 From Grade School To Gallery

While most New Orleans carnival groups strive to grow from krewes to super-krewes to mega-krewes, one tight knit collective of artists and Mardi Gras enthusiasts aim to preserve carnival heritage on a smaller scale; some might even say miniature. The Krewe of ‘tit Rex, whose name is a combined tongue-in-cheek reference to the granddaddy of all Mardi Gras krewes – Rex – and the Cajun term of endearment reserved for little brothers, produces a completely unique parade comprised of shoebox sized floats.

“Most of our founding members grew up in New Orleans or Louisiana and had the tradition of turning shoeboxes into Mardi Gras floats in school as kids,” co-founder Brett Evans said.  What was once an elementary school craft, would later take on a new artistic turn. Fast forward to 2009, when krewe founders decided to reconnect their childhood creations with an adult interpretation, and ’tit Rex was born. “My friend from high school, Greg, and I started with a gallery show of these little floats, “ Evans said. “We originally just had the parade go for a few blocks to end at the exhibit.  Soon it just grew from there.” 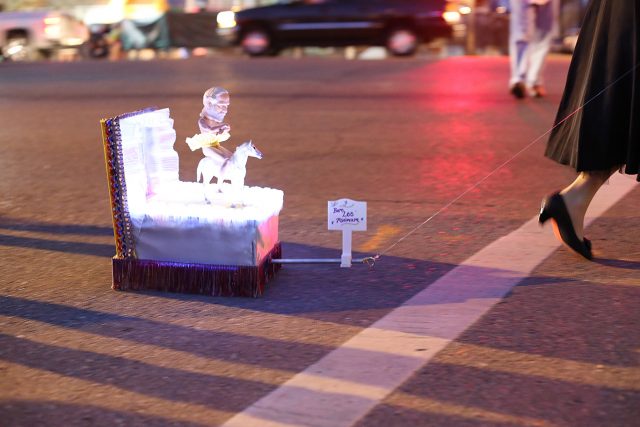 Tradition – With A Tiny Twist

After many back porch sessions with friends and krewe members, ‘tit Rex became as anticipated as the big parade guys on St. Charles Avenue just on a much smaller scale, complete with hand-made miniature floats and throws. According to Evans, ‘tit Rex members stick with the traditions learned from their art teachers back in the classroom.  “Many of our floats follow the traditional shoebox set-up, but with an eye to architectural construction that you just can’t always appreciate with the ‘regular krewes’ because you can see the whole piece without a bunch of people in front of it,” he said.

While the mini-krewe seeks to recall the days of childhood artistic carnival creations, it also carries the Mardi Gras tradition of satire, while poking a little fun at the mega-krewes.  “We wanted to get away from the over the top parades of krewes like Bacchus and Endymion,” Evans notes. “While they want to get bigger and bigger each year, we want to keep ours small.” 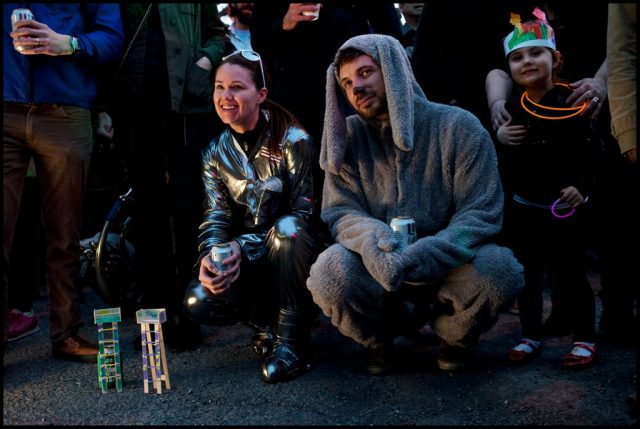 The wait list for krewe members is long, but the group sticks to a limit of 28 floats per parade.

Limiting both the size of the floats themselves, as well as the number of floats in the parade, ‘tit Rex continues to pack a big punch in a little parade. “We want to glorify the traditions of the shoebox float and Mardi Gras, but with a strange, weird twist,” Evans said.

The parade rolls Sunday, February 5th, at 4:00 p.m, starting at the St. Roch Firehouse, 1421 St. Roch Ave. For the parade route and more, visit the Krewe of ‘tit Rex site.