A Kitchen Staple in Many Cultures.

Around the world, in any region where rice is an agricultural staple, the cuisine will have some sort of a dish that combines leftover rice with other leftover bits repurposed to create a new dish. Think rice pudding (India), fried rice (Asia), arancine (Sicily), and avgolemono soup (Greece).

In New Orleans, 18-century street vendors — often Creole ladies of color — walked the streets around the French Quarter in the early mornings selling calas, a fried pastry made with leftover rice and dusted with confectioners’ sugar. Today the sweet treat can be hard to find, but jambalaya, which appeared in the Louisiana culinary canon around the same time, is not only still around, its popularity continues to grow.

Humble Beginnings of a Beloved Dish.

Historically, early Louisiana jambalayas of leftover rice and bits of whatever leftover meat and seafood were available were not found on restaurant menus and it would have been considered unseemly to serve the dish to guests. Over the years, the dish has evolved into a sought-after regional favorite with standard recipes combining raw rice, aromatic seasonings, spices, and very deliberate combinations of proteins. The state’s two distinct cuisines — Cajun and Creole — have evolved two distinct types of jambalaya: brown and red. Though Louisiana jambalaya is Cajun in origin, and brown-hued due to its reliance on smoked meats, in New Orleans — the epicenter of Creole cuisine — jambalaya is often red due to the addition of tomatoes, a staple ingredient in Creole cuisine.

The African Origins of Jambalaya.

“The origin of New Orleans’ jambalaya is greatly influenced by Jollof rice, a West African dish,” said Elizabeth Williams, Executive Director of the Southern Food and Beverage Museum (SoFab), an institution dedicated to the preservation and perpetuation of Southern culinary culture. Many of New Orleans’ African cooks were from West Africa, where Jollof rice was traditionally made from whatever ingredients were available, but tomatoes were a constant ingredient in the dish.

Spanish paella is also an ancestor to jambalaya. From 1762 to 1802 Louisiana was under Spanish rule with the Spaniards’ largest settlement, Galveztown, near present-day Gonzales, the self-proclaimed “Jambalaya Capital of the World.” Traditional paella varies among the regions of Spain but can include seafood, chicken, and meat.

Williams emphasizes that the origin of the word “jambalaya” must be clarified. There are many dubious explanations for the name. In the mixing pot of New Orleans-style foods, the combination of rice and proteins is meant to blend the three largest influences on Creole cooking: French, Spanish, and African. “The ‘jamb’ was seen as a nod to the French ‘jambon’ and ‘a la’ was clearly Spanish, while the ‘ya’ was thought to be an African word meaning ‘rice.’ It’s all wrong. Jambalaya is just a made-up slang word to describe a jumble.”

Whatever the origin of the name, the savory mix of rice, meats, and seasonings is now a staple of Louisiana cuisine and a perpetual favorite for feeding a crowd, whether at a festival or a family celebration. 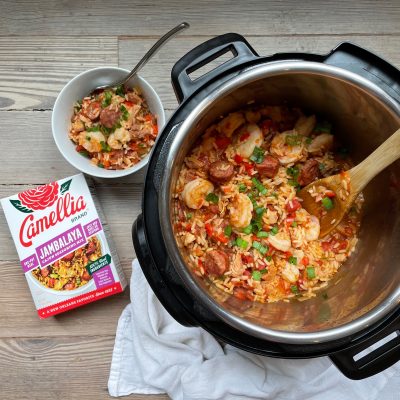 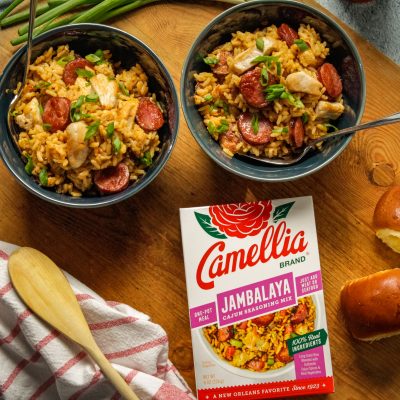