Isleño Caldo Soup: A Taste of Spain via South Louisiana

When it comes to exotic Louisiana subcultures that have captured the popular imagination, the Cajuns and Creoles have cornered the market. Thanks to larger-than-life culinary ambassadors such as Paul Prudhomme and Justin Wilson; Hollywood depictions such as Swamp People; and music crazes such as Rockin’ Sidney’s zydeco hit “My Toot Toot,” most of America has pegged the whole of Louisiana as happy-go-lucky, alligator-wrestling, French-speaking bon vivants.

But let’s not forget Louisiana’s “Spanish tinge,” to lift a phrase from New Orleans jazz giant Jelly Roll Morton. Past the Lower 9th Ward and down the road through St. Bernard Parish toward Delacroix Island live the Isleños — “masters of the marsh” who are just as culturally intriguing as the Cajuns, except they habla español rather than parle francais.

A Louisiana Isleño checks his muskrat trap in the marshes near Delacroix Island in 1941. (Library of Congress Prints and Photographs Division)

Under the radar for centuries, and yet practically in New Orleans’ backyard, are the descendants of Canary Islanders, or “Isleños,” who immigrated from the archipelago off the African coast in the 1770s and ’80s and settled in four Louisiana locations, the most enduring of which is St. Bernard, just east of New Orleans. 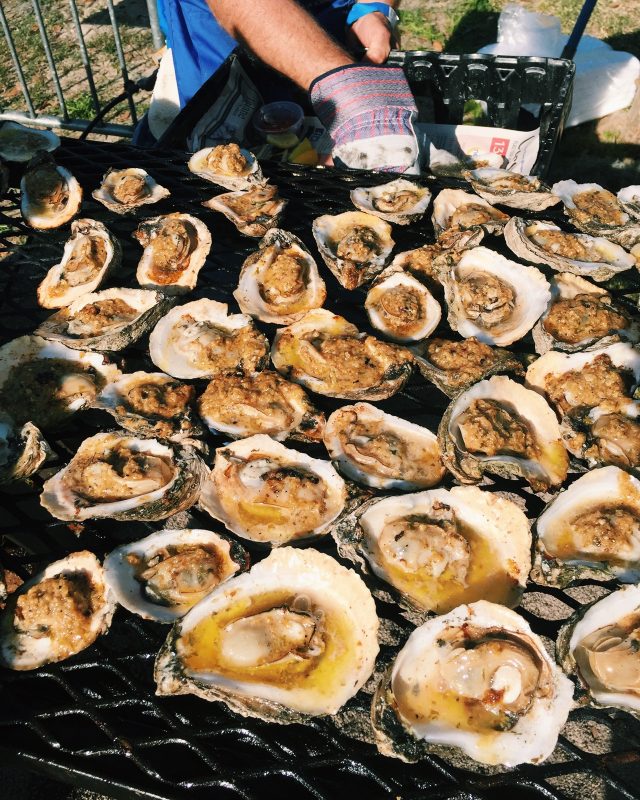 Like the Cajuns, the Isleños became farmers, hunters, trappers, and fishers in the dense, swampy terrain. Generation after generation thrived in the isolated cypress groves along Bayou Terre-aux-Boeufs, living self-sufficiently off the bounty of land and sea and selling their wares in New Orleans markets. Their Hispanic language and customs were preserved through their seclusion, and yet they also adapted their lifestyles to the unique lay of the Louisiana land. 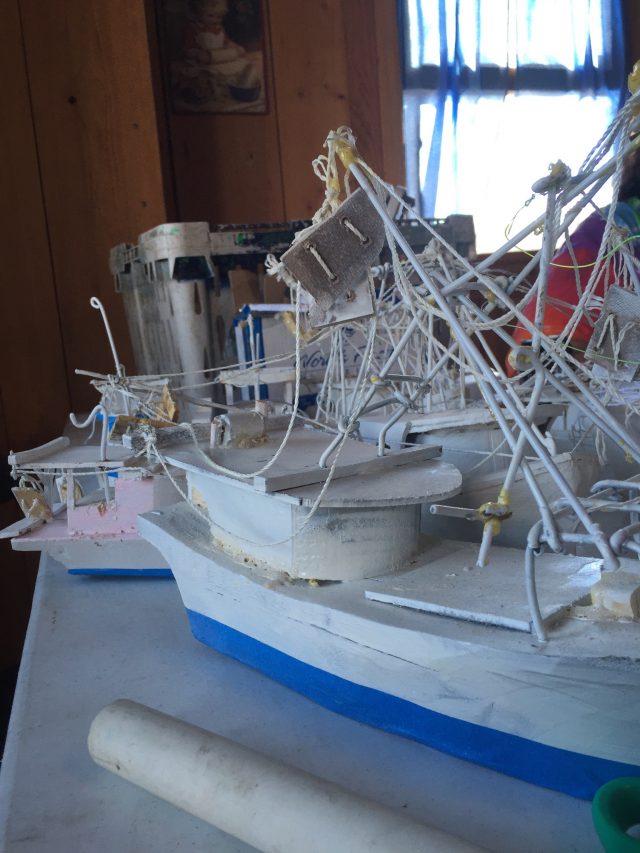 Boat models on display at the Isleño museum complex in St. Bernard depict the fishing and maritime lifestyles of the Canary Island descendants. (Photo by Marie de Grado)

Amazingly, their frozen-in-time 18th-century Spanish dialect survived the centuries, encapsulated in orally transmitted folk songs known as decimas, right up through Hurricane Katrina in 2005. And while their cuisine has much in common with Cajun cooking, drawing its ingredients from the same region, a few distinct dishes with roots in the Canary Islands are still served today.

Thanks to the preservation and outreach efforts of groups like Los Isleños Heritage and Cultural Society, which just celebrated its annual “Los Isleños Fiesta” on March 5-6, the world is starting to awaken to the legacy of the Isleños.

Saveur magazine has profiled Isleño food traditions, and Bizarre Foods host Andrew Zimmern even visited “Da Parish” and sat down with some locals for a bowl of Caldo.

Caldo is the most famous Isleño dish, a complex vegetable soup that employs a medley of diverse ingredients, much like a Cajun or Creole gumbo, but without a roux.

Navy beans (or limas) are the Caldo’s centerpiece, supplemented by components such as pickled pork, fresh green beans, corn, red potatoes, sweet potatoes, carrots, and squash. Of course, like gumbo, each Caldo recipe can vary from cook to cook or family to family, and depends on whatever ingredients are on hand at any given time.

The Caldo recipe presented here is from Isleño elder stateswoman Dorothy L. Benge, whose family donated land that serves as part of the overall Isleño museum complex. According to Benge, this recipe, which uses both salt pork and pickled pork*, is “from my grandmother, Camille Silvera Molero, 1891-1976.”

A pot of Caldo simmers at a recent Isleño Fiesta. (Photo from Los Isleños Heritage and Cultural Society’s Facebook page)

Directions:
Place salt pork in pot. Cover with water and bring to a boil. Boil 5 to 10 minutes to remove some of the salt from the pork. Drain and rinse, discarding the water. Drain beans from overnight water and rinse. Add beans and salt pork and pickled pork to stockpot with 3 quarts water. Bring to a boil and cook until beans are tender, about 1 hour. Add remaining vegetables and bouillon cubes. Cook until potatoes are done, about 20 to 30 minutes. Add more water if needed. Add salt. Serve over rice. Serves 10 to 12.

Go Soak Up Some Isleño Celebrations

Every March the museum complex at 1345 Bayou Road in St. Bernard is the site of the annual Isleño heritage festival, full of rich history, beautiful scenery and architecture, authentic arts and crafts, live music and dance, and delicious food. Besides Caldo, fest-goers at the March 5-6 event gorged on shrimp, oysters, and fish; Louisiana classics such as jambalaya and gumbo; and Spanish favorites such as paella, flan, and sangria.

Also be sure to catch Chalmette’s 2019 St. Bernard Irish Italian Isleños Parade, which will feature at least 45 floats, 25 marching groups, and 325,000 pounds of fresh produce (cabbage, potatoes, onions, carrots, etc.) for whipping up your own batch of Caldo at home! The parade rolls April 2, 2022 at 11 am.

*Salt pork usually comes from the fattiest part of the pork belly but is neither smoked nor cured like bacon, just generously salted for preservation. No other seasonings are added.

Pickled pork often is made from meatier cuts and has been rubbed and layered with a mix of salt and pickling spices such as mashed cloves, ground allspice, chopped onions, and bay leaves. The meat is rendered supremely tender and is preseasoned from the brine.

Both salt pork and pickled pork are used to flavor slow-cooked pots of beans and smothered vegetables. The fat from the salt pork melts into the dish, lending flavor, whereas the generous seasonings used in the brining process for pickled pork are rendered into the pot as the meat breaks down and saturates the pot’s other ingredients with its flavors. 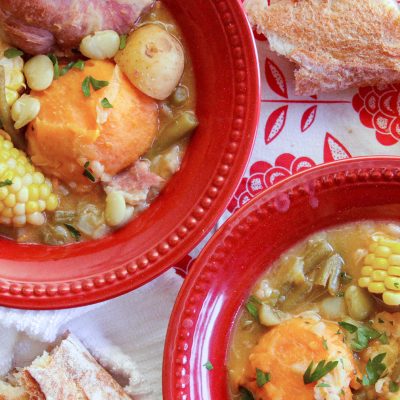