The Reveillon Feast: A Holiday Dinner with History and Style

Holiday feasts, known as “Reveillons,” take their name from the French réveil, which means “awakening” and are so named because participants would have enjoyed them as delicious refreshment after a long evening fast.

The Reveillon Tradition and History
The sharing of an opulent repast following the holiday Mass on Christmas Eve and again on New Year’s Eve was a custom inherited by Louisiana’s Creoles from their European ancestors. Though guests were invited for New Year’s Eve, the Christmas Reveillon was strictly a family affair with grandparents given places of honor at the table, the choicest selections from the meal, and the attention and adoration of the younger members of the family. Only the most exceptional foods would suffice for these feasts. While their European relatives dined on escargots, foie gras and turkey stuffed with chestnuts, the south Louisiana celebrant would have enjoyed a regionally adapted menu of oyster stew or turtle soup; rich puddings and custards; cold beef daube glace; and fragrant roast game or sausage, perhaps braised in a savory pie or casserole with beans or legumes. Copious amounts of wine, brandy and cordials would have loosened things up for participants on either continent and candied fruits and fanciful desserts like bûche de Noël or croquembouche would have completed the meal and sent the devout tottering off to bed stuffed and satiated, probably as the sun came up.

Reveillon’s Rebirth
By the 1930s, the tradition of the old Creole Reveillon dinner had largely disappeared from the roster of holiday celebrations. However, by the 1980s, the Creoles’ descendants embraced anew those historic customs that distinguished them from everyone everywhere else. The custom of lavish holiday dinners was resurrected. Restaurants started offering multi-course “Reveillon” dinner menus during conventional dining hours throughout the holiday season, and ambitious home cooks eager to show off their talents (and their fine china) re-adopted the practice as well.

The Contemporary Reveillon Dinner
The contemporary Reveillon dinner can take virtually any form so long as the foods bear an air of luxury in either their composition or execution. This is the time to trot out the delicacies or slave over something complicated and impressive. Being at the peak of their season, oysters are often chosen to start the meal, followed by a rich bisque or hearty gumbo. A course of roast game or a lavish cut of meat might follow along with a rich savory pie or casserole. A once-a-year showstopper dessert should round out the meal.

Cassoulet, a rich white bean casserole, is perfect for the Holiday Table
This cassoulet of fresh Gulf shrimp, Louisiana’s famous smoked andouille sausage, and creamy white beans is a rich and fragrant one-pot dish that can simmer away on the stove as you work on other parts of your celebratory meal. It pairs beautifully with roasted meats and game as well as fish. The regionally-adapted stew would have been familiar to our French ancestors. Though traditional European cassoulets vary by region, they were historically built upon a base of white beans and cooked in a sealed crock with slanting sides, known as a cassole, from which the dish takes its name.

Add the navy beans, three bay leaves, and Creole seasoning to taste to a large saucepot. Add enough water to cover the beans by 3 inches. Bring to a boil and cook, adding additional water as necessary, until beans are soft, about 1 hour. Drain and set aside.

Heat the olive oil in a Dutch oven, preferably cast iron, over medium-high heat. Add the Andouille and cook until brown, about 10 minutes. Add the onion, celery, garlic, oregano, and Creole seasoning to taste; cook until the vegetables are tender and translucent, about 7 minutes.

Crush the tomatoes with your hands over the contents of the Dutch oven before adding them to the pot. Add the 2 remaining bay leaves, Worcestershire, reserved navy beans, thyme, and green onions. Add the chicken broth, and bring to a boil. Reduce the heat to medium-low and simmer until the beans have absorbed the broth, 15 to 20 minutes.

Meanwhile set a low broiler. Combine the Panko, Parmesan, oregano or thyme leaves, olive oil, and salt and pepper to taste. Set aside.

Alternatively, the cassoulets may be broiled and served in individual ramekins. 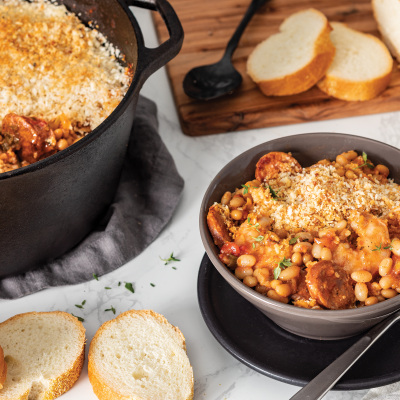