Cooking With Lentils: A Legume That’s Easy To Love

Though sometimes associated with ‘70s-era “commune cooking” – big pots of bland brown stews – in reality, lentils are quick-cooking, protein-packed powerhouses with an earthy flavor that lends itself to all kinds of cuisines and seasonings. Add in the fact that they are inexpensive and can be stored in a cool, dry place for up to 12 months, and it’s easy to see why lentils should be a staple in your pantry.

Available in a variety of colors ranging from yellow to red-orange, green, brown, and black, lentils have been a principal ingredient in world cuisines, primarily Near-Eastern and European, since prehistoric times. Archaeologists suspect they may have been the world’s first cultivated crop as early as 13,000 years ago and together with wheat and barley, drought-tolerant lentils were the agricultural staples of early Greek and Roman cultures. They vary in size and are sold in many forms, with or without the skins, whole or split. They belong to a variety of legume known as a “pulse” – or edible seed – and are both extremely nutritious and quick to prepare.

A Crop Prized in Many Cuisines

Lentils were introduced to the New World by Spanish and Portuguese explorers as early as the 16th century, but did not really catch on in America until the 20th century when they were promoted during World War II as an alternative to meat because of their high protein content – the second-highest ratio of protein per calories of any legume, after soybeans – and low cost. They are also loaded with potassium, folate, and dietary fiber. Like with other legumes, lentils and rice are a common food pairing, and provide a complete protein.

Today, about a quarter of the world’s lentils come from India, where more lentils are consumed than any other place. Indian “dals” are simple lentil dishes – dal means lentil in the language – and curries are lentil dishes seasoned with a “curry powder” mix or various seasonings, including coriander, turmeric, fenugreek, cumin, fennel, cinnamon, chili pepper, clove, ginger, cardamom, nutmeg, paprika, and black pepper. Interestingly, though it’s far from the regions commonly associated with lentil-based cuisines, Canada is the largest export producer of lentils in the world. In Jewish mourning tradition, lentils are customary as food for the bereaved, together with boiled eggs, because their round shape symbolizes the life cycle from birth to death. Lentils and sausage are also eaten together on New Year’s Day in both Italy and Hungary, where the lentil’s coin shape is regarded as a symbol of prosperity.

How to Cook Lentils

Dried lentils don’t need to be soaked before being cooked, and only require a cooking time of 20 to 40 minutes, depending on the variety and use. Lentils with the husk remain whole with moderate cooking. Small lentils without the the husk cook very quickly and break down into a thick stew.

Brown lentils are the most common variety available in grocery stores. They have a mild, earthy flavor and creamy texture, and soften when they cook, but still retain their lens-like shape. They are commonly served hot in soups and stews but they are also delicious served cold as a salad mixed  with finely minced onion, peppers, and spices, and dressed with olive oil and lemon juice or other vinaigrette. Prepared this way they are a common sandwich filling in meatless diets.

French green, or Puy lentils, have a sharper, somewhat peppery taste. They take longer to cook than brown lentils and retain some firmness, making them a favorite for salads due to their toothsome texture.

Red lentils are brown lentils with the hulls removed. Their mild, sweet flavor is favored in Indian and Middle Eastern dishes. They break down into a golden-colored mush when cooked and they can do double-duty as a gluten-free thickener in other recipes.

Small, black, and shiny, Beluga lentils resemble Beluga caviar when cooked. On the expensive side – by lentil standards; they are still a very inexpensive source of protein – black lentils have a strong, earthy flavor. When the hull of the black lentil is removed, the mildly flavored white lentil is left behind.

Check out our helpful guide to all things lentil here.

Whichever lentil type you buy, you can be sure you will find them easy, adaptable, and delicious. See some of our favorite lentil recipes below:

A quick and delicious meal; the seasoning can be adjusted to your comfort level of heat. Coconut milk adds richness and a subtle flavor to the dish while tempering the spiciness. Perfect for a cold evening, it can be served over rice or with naan or pita bread for a complete meal. 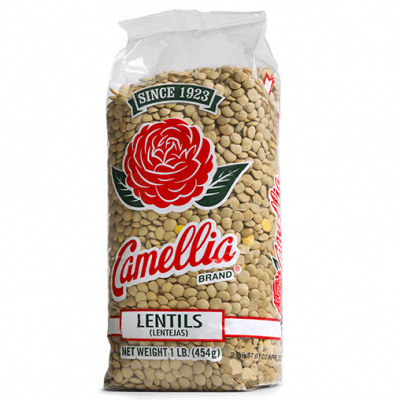 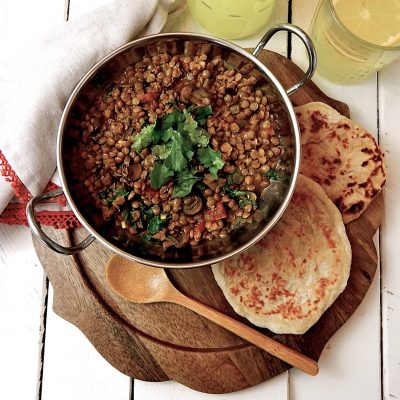 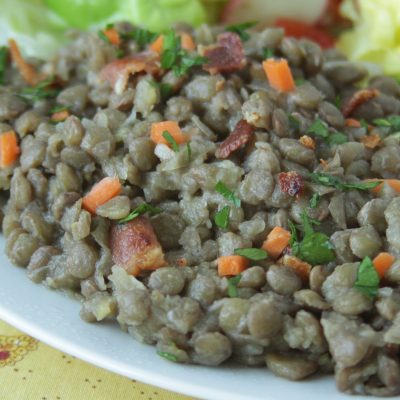 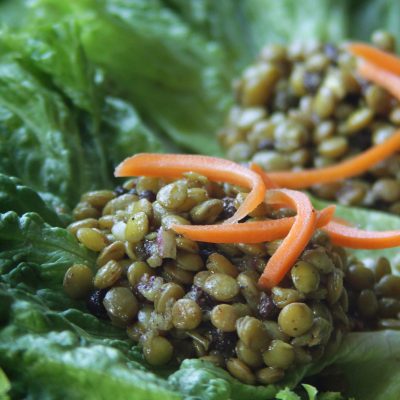 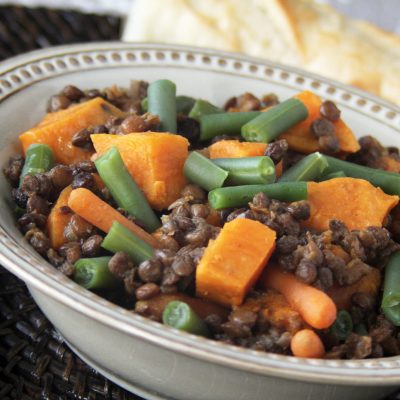